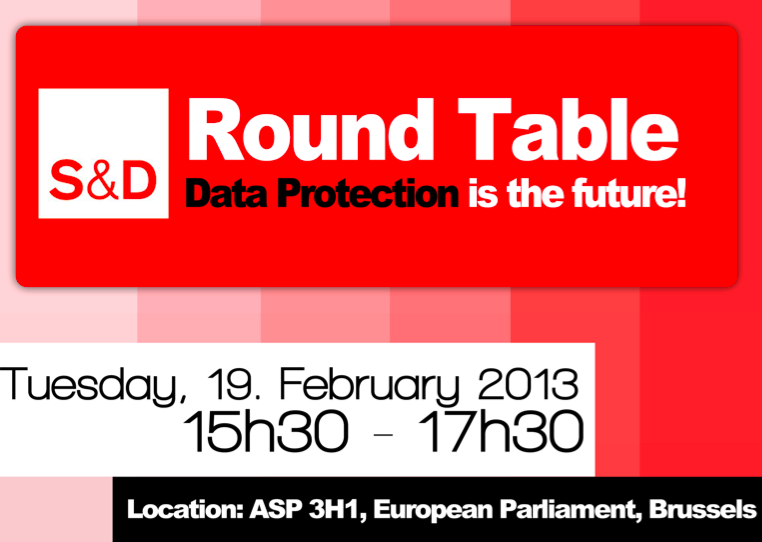 The European Data Protection Package is one of the most important pieces of legislative as it presents a complete renewal of data protection in Europe. Can Europe make data protection count for global players? Which topics should get more attention?

15h00   Accreditation at the entrance of Place Luxembourg
15h30   Start of the event & introduction by MEP Birgit Sippel, LIBE
15h40    Welcome note by MEP Hannes Swoboda (President of the S&D group)
15h50    Roundtable „Data protection is the future“
(the debate will be moderated by MEP Josef Weidenholzer, LIBE)

Please register and email your full name, ID no. and date of birth to [email protected] or [email protected] – before the 15th of February 2013.The reception area for the event is located at the Alterio-Spinelli (Place du Luxembourg, Espace Simone Veil) entrance of the Parliament. The distribution of the badges will take place there. If you have any other questions feel free to contact us.

How to get it right: Europe’s data protection reform for the 21st century

In January 2012, the European Commission has proposed a reform of the outdated data protection rules. The package is one of the most important pieces of legislation in the remaining legislative period as it presents a complete renewal of the existing legislation of 1995 and conceived a legislative opportunity to develop a fully coherent and high standard legal instrument. The proposal has caused heated debate on issues such as the right to be forgotten, privacy by design and data portability. Now that the European Parliament is in the final stage of forming it’s opinion on the new rules, there is still much to talk about. What will be the consequences? Can Europe make data protection count for global players? Which topics should get more attention? And what are the threats?

The reform package put forward by the European Commission consists of two documents: The General Data Protection Regulation will be binding for both corporations and public authorities with the exception of police and justice. For that field, the Commission proposed a Directive. While the Directive will have to be implemented by member states, the Regulation will have immediate effect.

Many points of the Regulation have been heavily debated. Civil rights organisations on the one side and private sector interest groups on the other have different opinions on some of these. Among those are
•    the right to be forgotten. Should consumers be able to delete their profiles and data, or do they belong to the companies that stored them?
•    data portability. Again a question of „Who’s data is it?“ In what way should consumers get hold of their data?
•    sanctions. What should happen when data is used in ways that are not in line with the Regulation? Can data protection count without tough penalisation?
However, a lot of companies acknowledge that harmonisation and a high standard of data protection will strengthen the trust of consumers and therefore be the basis of growth. With regard to the directive for police and justice, some points of interest are
•    the transfer of personal data to third countries, i.e. the U.S.
•    the scope of the regulation: Will it concern European authorities like Europol and Frontex?
•    the binding character. What is more important, minimum standards or harmonisation?

After the European Commission proposed the reform in January 2012, the European Parliament began to make up it’s mind. In January of 2013, the draft reports of the rapporteurs were presented. After the IMCO committee voted it’s opinion on the Regulation on January 23rd, JURI, EMPL and ITRE committees will follow in Febuary. Afterwards, leading committee LIBE will vote on amendments on Febuary 27th and on the passage in April. The Parliament will enter negotiations with the Commission and the Council.
EUdatap: Roundtable_February, 19.2013, 15.30h-17h00, Flyer Download